The B-side of the Earth 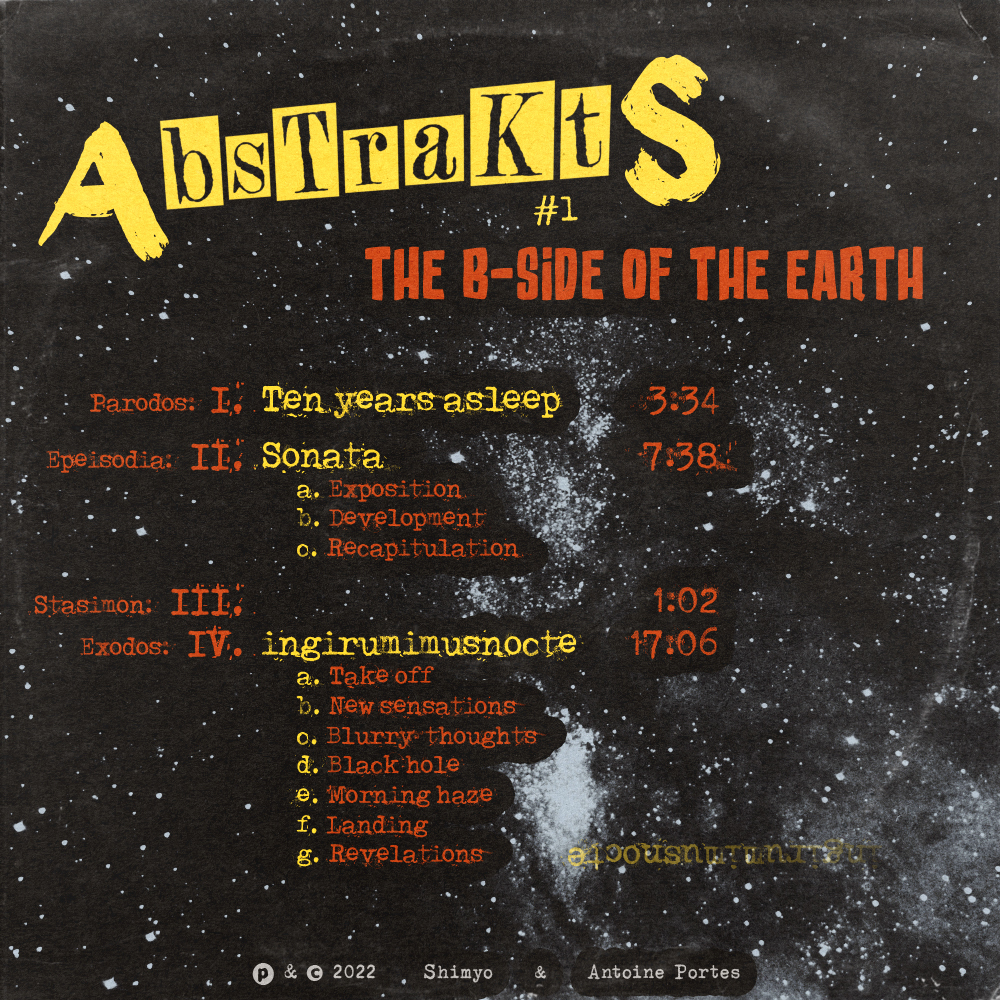 This record was produced throughout 2021 and released in early 2022. Its concept, composition, interpretation, recording, mixing, mastering and artwork were all and exclusively achieved by Shimyo and Antoine Portes — which allows us to proudly declare it 100% D.I.Y.!

The HD (96kHz-24bit) digital full version is available for 5€ at Bandcamp.com.
But you can also listen to it on the following capitalist streaming platforms:
Spotify
Deezer
Youtube Music
Apple Music
Amazon Music
Qobuz
Anghami

This project started as a simple idea: Shimyo approached Antoine Portes and asked him "hey, if I provide you with an instrumental Hip Hop track, do you think that, instead of words, you could enrich it with more instrumental parts?".
From there on, they began working on what would soon become Ten years asleep (track 1). At this time, it was music for pleasure, the word "album" was never spoken.
Once completed, this piece of music was described as "oscillating from not completely sad to almost joyful but mostly remaining right in the middle". Strangely enough, they seemed satisfied with this judgment.

"This was fun! Let's do it again.", they exclaimed in unison. But of course, doing the same thing twice is the very definition of boring.
So Antoine built a guitar and customised his bass, Shimyo removed some of the dust on his Soviet multitrack recorder; and they destructured the second Hip Hop track to turn it into a peacecul dreamy ambient intermezzo. Afterwise, Antoine noticed that the final result almost fitted the sonata form (it only lacked a modulation between themes A & B) — "close enough", they thought; hence the very sober title: Sonata (track 2).

"This was promising! Let's dig deeper."
This time the concept came before the experimentation and the fact that there would be an album had become quite obvious. – How about a very progressive piece in form of a palindrome starting with a powerful riff and going back to it after evolving through all schoenbergian transformations of the initial melody across several different parts (including a Hip Hop-like one reminiscent of what we did before and a central and symetrical tribal drone from outer space)? – Mmh I don't know... – I mean, something like Atom Heart Mother. – Ah! ok then. And thus began the never-ending work on ingirumimusnocte (track 4 — or 3 on the abridged version).

NERD ALERT! what comes next is technical and boring, keep reading at your own risk.

This whole seventeen-minute long piece is derived from a four-note leitmotiv:

Such a reference seemed especially suited for an album so much tainted by Situationism: the movie quotes, the title, the artwork and the overall don't-give-a-damn attitude all fit what Debord called "Détournement" (hijack) and prescribed as the adequate form of Revolution in societies were historical development has reached the spectacular phase. Ideology is obviously a dangerous poison, but the ennemy of my ennemy might be of good advice...

This music is instrumental, which means free of any nationalism, imune to walls, fences and borders: it is for everyone. This music is no mean to any lucrative or personal end: its one purpose is to provide pleasure. This music is not commercial and does not ever want to be: it's a cynical cry of revolt from a kind of Art that refuses to be reduced to a commodity.

Deep down in Paris suburb close to Brie-Comte-Robert,
Way back down in the Forest of Notre-Dame,
There stood a sad village made of churches and pubs
Where lived two country punks named [Shimyo] and Antoine Portes,
Who never ever learned to play or sing quite well
But they could handle a beer and liked to brag about it.

Well that was about ten years ago: our two teenage punk rockers teamed up in a bunch of bands to express the violence that was tormenting their drunken souls (some evidences of these somber times remain here) before growing apart until Moira united them again. This happened by the end of the cursed year 2020 and sounded a bit like "Holly shit! You're still alive? — Barely! You? — How 'bout some old-fashioned noise?".

In the meantime, Shimyo had been digging a deep grave into the underground, changing pseudonyms more often than underwear, and thus becoming the anonymous prophet of the mole-people, the muse with a thousand names, the turbulent light in the blind cavern. He hadn't quitted music of course. Apart from being a raper/beatmaker, he had nourrished a sick passion for acousmatic experiments and flourished amongst the death rattles of broken machines.

Antoine Portes, on the other hand, had fallen to the very edge of society, crawling homeless, friendless, jobless... everythingless (ecxept for music of course). That is until he met his soulmate who put a drop of lust for life into his dried out veins and made him rise again as the poison in the capitalist machine: a music composer for a greedy devil known as Television. Due to his extreme bareness, he had to learn how to make music whithout instruments: his new weapons were stolen pencils and recycled paper.

So here we are, after ten years of silence, with a new rhapsody trying to merge our parallel lives with our common nostalgy. Enjoy it folks, see you in another ten years!